Just What the Doctor Ordered


View any Updates to the Publication Here

Comments and corrections will appear here. As of yet, the publication is up-to-date!

John “Jack" Cameron Dancey (April 4, 1914 - April 22, 2007) was a successful local veterinarian and great-grandson of Dr. Edward Dancey. This interview covers his family history, his career, and some history of veterinary science.

This interview was conducted by Karen Stafford on August 9, 1983.

Many thanks to Chris Dancey for her help with our publication.

The sketch of Dr. Edward Dancey featured in the video was published in the 1877 Atlas of Elgin County.

Learn more about Edward Dancey on page 2 of Just What the Doctor Ordered.

Peter McMurrich McLay (July 3, 1925 - March 6, 2008) was a son of Dr. Homer Garfield McLay, and grandson of Dr. Peter Walker McMurrich McLay. Peter owned a successful jewellery business on Talbot St. E. in Aylmer, though in this interview he is asked primarily about his father and grandfather.

This interview was conducted by Kelly Wilson on August 16, 1983.

The photograph featured in the video was donated to the Museum by Peter's wife, Carol. The photo depicts a young Peter seated on his father's (Homer's) lap.

Many thanks to Carol and to the McLay family for their long years of support and for their generous donations.

Learn more about the McLay Family on pages 15 to 23 of Just What the Doctor Ordered.

George Frederick "Fred" Caughell (June 9, 1912 - 1994) was a son of Ern Caughell. Ern was a pharmacist and proprietor of the White Drug Store. Fred worked on and off for his father at the store, and would become its proprietor after Ern's death.

Ernest Albert Caughell (May 30, 1875 - April 10, 1956) was a graduate of the Ontario College of Pharmacy. He purchased the White Drug Store in June of 1896, alongside his father and business partner, George H. Caughell. The business was initially known as White Drug Store, and eventually renamed Caughell & Co.

This interview was conducted by Nancy Johnston on August 29, 1986, and funded by a generous Seed grant.

Learn more about the Ern Caughell on pages 92 to 94 of Just What the Doctor Ordered.

Wilfrid Godfrey Hill (October 8, 1918 - February 1, 2007) was one of the two founders of Hills Pharmacy of Aylmer. He and his brother, John, settled in Aylmer after serving in WWII to establish their own business.

This interview was conducted by Nancy Johnston on August 28, 1986, and funded by a generous Seed grant.

The graphic featured in the video was taken from a paper product bag in the Museum's archives.

Many thanks to the staff of Hills Pharmacy for their help with our publication.

This interview was conducted by Nancy Johnston on August 25, 1986, and funded by a generous Seed grant.

The ad featured in the video was published in the January 12, 1966 edition of the Aylmer Express.

Many thanks to the family of John Ball for their help with our publication.

Learn more about John Ball on pages 113 and 114 of Just What the Doctor Ordered. 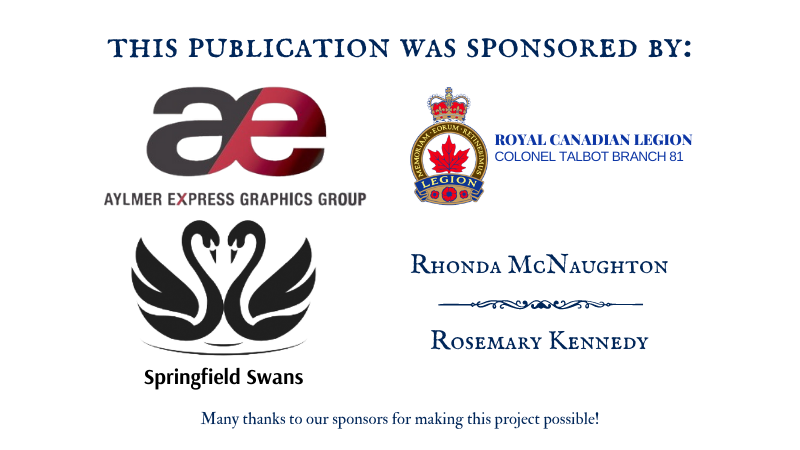